Corcoran Men's 10 in. Leather Jump Boots | Made In USA 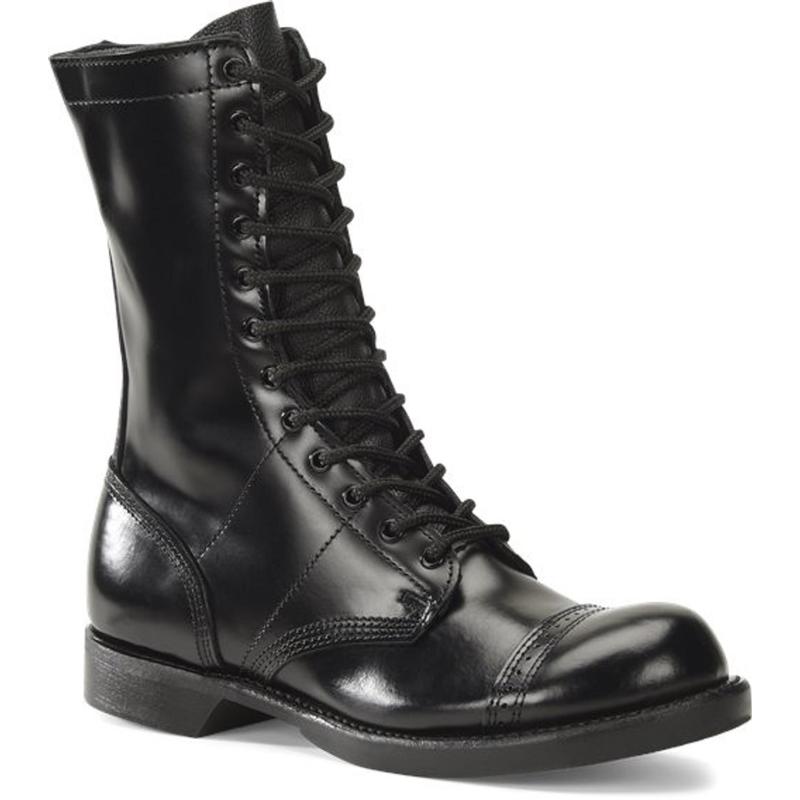 Corcoran Men's 10 in. Leather Jump Boots | Made In USA

For firm footing in the aircraft and extra protection for landing.

Corcoran shoes and boots have earned the utmost respect of military personnel over the years. From the in.Original Jump Boot in. that carried paratroopers behind enemy lines in Europe to the newest in.Combat Boot in. currently being worn across the globe, Corcoran boots have been faithfully fighting alongside American soldiers, providing the foundation for high-performance military operations.

Reviews Summary
Corcoran Men's 10? Leather Jump Boots - Made In USA
4.5
based on 8 reviews.
100% of respondents would recommend this to a friend.
Sizing:
Feels true to size (7)
Feels full size too big (1)

3.0
Seems nice, not for my feet
COMMENTS:
So, I really want to have a pair of these boots. But, after trying on several different sizes, it's clear that I can't. The boots are very narrow in width, so I had to order the widest size. That's fine. The problem is that the boot, even at its widest, is just not proportioned like my foot. The part of the boot meant to fit the ball of the foot is just way too far forward in the boot, as if it was fit for someone with very short toes and a very small ball-of-the-foot. Great looking boots, made in the USA with nice construction, but for me, freakishly, comedically not foot-shaped. If you have a wide or otherwise unusual foot, beware.
BOTTOM LINE:
recommended

By: American All The Way
From: Seattle, WA

5.0
Solid American Made Boots
COMMENTS:
So I'm a big fan of combat boot style/traditional work boot style boots. I wanted to add a new one to the collection. Decided to give these a go because they're cap toe and look a little different. I've been buying exclusively US made shoes for several years now, and it's been well worth it. I bought a pair of good (not the imported) Red Wing standard black combat boots a few years back. Then I got a pair of brown Justins. Given all similar price points, all American made, I have to say these are comparable. They've all had minor pros and cons as with any product. I'll try to be detailed below! They fit true to size on me, and I'm a single E extra wide. These are very comfortable thus far. Break in was rough on my feet, but after a total of 8-10 hours in them they've been good. I decided to Mink oil them (inside mostly because the high shine coating doesn't let much through on the outside yet, I imagine it will once worn more) and that softened them up real nice compared to the stiff feel they had from the factory. They've been very cozy, even after many hours on my feet. As good as anything I've ever owned. The leather thickness and quality is pretty solid. A tiny bit thinner than the Red Wings or Justins, but not by too much. Still way better than typical cheap boots. I like that they're unlined like my Red Wings, as I know the fancy padding will be the downfall of my Justins someday. I don't think I'll ever buy a pair of boots with lining again in my life. No need for it, just one more thing to go wrong! Leather is perfectly comfortable!!! The soles don't have as much traction as the Red Wings or Justins I have, but aren't bad. Keep in mind my other boots happen to have oil slick resistant soles, which these make no claim to have such specs. Super slippery wet surfaces on a regular basis are probably best avoided as far as these guys go. Corcoran does make other soles on variations of this boot that are probably better for this type of stuff. The stiching on these is a little less "polished" than the RWs and Justins too. There were a couple of threads that were seemingly intentionally expose on their ends. Not a big deal, but I found by trimming them that it's best to leave them be! One stich tried coming undone after I messed with it. If you don't like the unsitely thread, use a needle to "tuck" them back into an existing stich hole where the end isn't exposed, that's what I ended up doing and it's worked great. All in all these are pretty solid boots. They beat they heck out of Lugz or Sketchers or any of the big box store import junk. I figured comaring these to other quality boots might be of use, hence my Red Wing and Justin comparison. These were also $20-30 cheaper, so in the grand scheme of things I have to give these a 5 out of 5 for the money. If they were $200 boots I'd probably call them a 4.
BOTTOM LINE:
recommended

By: Road Trooper
From: Texas

5.0
Perfect fit, exceptional quality
COMMENTS:
The first day I had these I thought I had made a mistake: They were stiff and very difficult to get on and off (given that this model is not speed-lace or zipper, I did expect a certain difficulty to begin with). The second day they had broken in enough to be much easier, and from the third day on they have been a dream: Supportive and comfortable when laced up, but easy enough to get on and off. The all leather construction holds a shine great (one of the main reasons I chose these) and even as daily work boots they look very sharp weeks on. Very happy with my purchase.
SERVICE COMMENTS
Quick service and fast delivery...better than expected. Yeah, I know that it was drop shipped from the manufacturer and that SuperCasuals doesn't keep them in stock, but even so I expected a lag from order to delivery and there just wasn't any. Got here quick!
BOTTOM LINE:
recommended

By: x-cop
From: Fountain Hill, PA

4.0
Buying Corcoran jump boots since 1969
COMMENTS:
Have worn Corcoran jump boots as a soldier, police officer, and now as uniformed security. They take a great spit shine and look sharp with a uniform, also hold up well. I just retired my first pair (from 1969!)a few years ago when, after numerous re-heelings/re-soleings, they finally cracked through at a flex point. The only reason I didn't give five stars is because the last 2 pairs I bought had leather on the toe cap that was a little "pebbley" (not quite smooth)that made it a little more time-consuming to build up a good smooth base for a first class spit shine. This is only a concern if you want to shine them up for uniform wear, and it can still be done, just takes a little more work.
BOTTOM LINE:
recommended

4.0
good buy
COMMENTS:
Good duty boot. Full stitch and soft tounge. Broke in in one shift. Spit shines to the absolute best shine possible. Just pay a little attention to your lacing and tension and the boots are very comfortable. No blisters ot hot spots even over double shifts. Sizing seemed pretty close, was able to just manage a fit of top quality insole inserts in and still keep fit.
BOTTOM LINE:
recommended

5.0
Good Boots
COMMENTS:
I like my boots. They let me work all day on these concrete floors of my correctional facility.
BOTTOM LINE:
recommended

By: Sean
From: Kentucky

5.0
Great people. Quality products.
COMMENTS:
When I ordered there were a few small problems on my end and the people at super casuals did an amazing job of working with me to get my order processed as painfully as possible. When my boots arrived they were brand new and even the box was in perfect shape. I will definitely be buying here again. Great price, good people, sturdy boots.
BOTTOM LINE:
recommended

By: Larry
From: Texas

5.0
Excellent Boot
COMMENTS:
First of all - I do not like buying on-line but Super Casuals had the best price and was excellent to buy from. [...] I would buy this boot from them again. Most comfortable boot I have ever worn. Comfortable from the moment I put them on. Will most likely buy my son-in-law a pair for his birthday.
BOTTOM LINE:
recommended

Waist
Measure around your natural waistline.

Inseam
Measure similar pants that fit you well. Lay them flat, with the front and back creased smooth. Measure along the inseam from crotch to the bottom of the leg hem along the inseam.